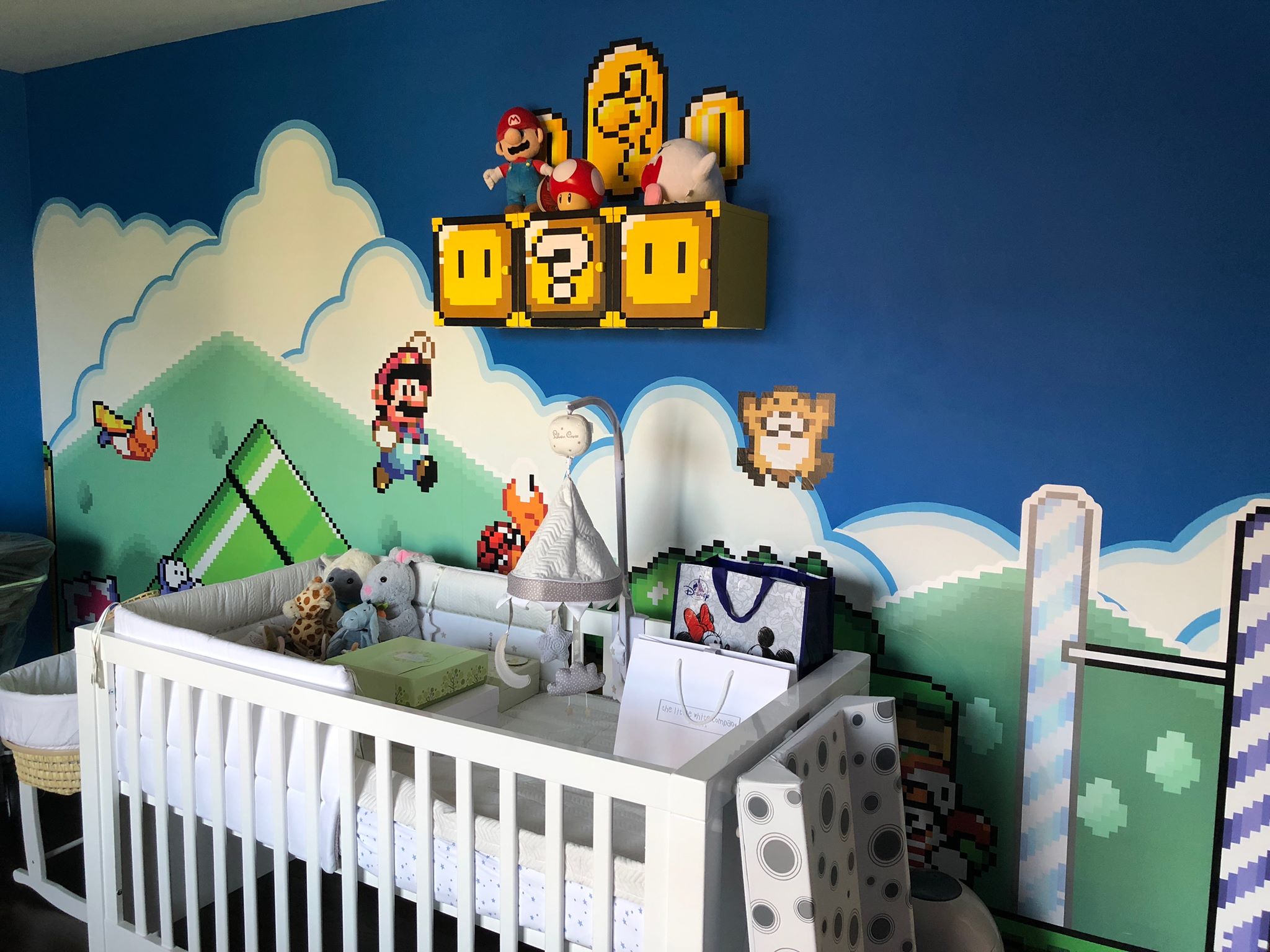 Last year, before the birth of my first son, I was able to get creative and decorate the nursery. Being a huge fan of video games (and retro style graphics!) logically I chose a Super Mario theme for the room and set about making plans to create a large wall mural and other themed objects (as well as doing the boring adult stuff like flooring and painting the walls).

It took approximately 2 months to get everything completed, and a lot of that was lead time on the custom things I needed to order. I do wish I took more shots during the build, but alas I didn’t think I’d be blogging about it. Maybe next time!

The first thing I built were some customised LIXHULT wall cabinets from Ikea. These conveniently come in yellow if you can get them. Using a combination of masking tape, acrylic paints, and stick on squares I created rows of pixels to add details and shading based on sprites from Super Mario World.

The next thing I built was a warp pipe cabinet which took a little more time and effort. I screwed together 3 Ikea EKET units to form a pipe-like shape and then applied several base coats of green. It took a lot of paint to cover these units effectively.

After that, I did some math to work out how large the ‘pixels’ needed to be, then used masking tape to paint on rows of colour using acrylic paint and Mario sprites for reference. I finished it off with some clear varnish to protect the paint work!

One of the last things I made (well, to be fair I only cropped some images for it) was a custom rug. I found a website called Bags of Love which do custom prints on various objects. I sent them a large image showing the map from Super Mario World and they did the rest.

It’s actually quite nice quality, and so far, touch wood, nothing has been spilled/puked/pooped on it but I know it’s only a matter of time. 💩🤦‍♂️

Creating a large mural was probably the most difficult and time consuming thing I had to do. To start on the design, I found a bunch of sprite sets on the web and created a document in Sketch where I was able to move the tiles/sprites around in a grid to form a scene.

The 16-bit sprites were obviously very small and would need to be scaled up to work as a wall mural so I calculated how big I wanted each pixel to appear on the wall and did some math to work out how many pixels across I would need to make the canvas to fill the entire wall once scaled up.

I believe to keep things simple, and to keep the mural to scale with the furniture I made, it worked out as being around 1.5cm per pixel.

To save myself some time and lower the costs, I hand-painted clouds on blue walls, and then planned on overlay all the characters and other graphics on top, either painting or sticking them on.

I was slightly over-ambitious with my first plan. I intended to create the entire design using small stick-on squares to make pixels, like a mosaic, but after testing this out on some smaller elements it was simply too time consuming.

It did work out quite nicely on the coins and clouds though which were made with hundreds of sticky squares from some website I have since forgotten.

Abandoning that plan, I found an alternative; large wall stickers printed by Sticker Mule. Large sizes are not cheap, and annoyingly their maximum sizes were not quite large enough to fit the entire wall, so I ended up needing to split my design into two pieces. The support folks at Sticker Mule were pretty helpful though, and helped ensure the printed murals were scaled to the same size and would line up edge-to-edge.

I scaled the images up to meet the minimum size/DPI requirements and ordered the prints. The images were massive, ~25,000px x 17,000px and 8mb. I made the fans run on the macbook that day!

Tip: All the image editors on mac did not scale images up well without blurring my beautiful pixels. The only app capable of doing the job was Gimp which kept those pixels square and clean. Not bad for open-source!

The stickers came in tubes, and although they had white borders (which were semi-hidden by the clouds I painted), they did manage to print to the edge where they joined so I didn’t have to cut them down by hand, and the join was more or less seamless.

To finish things up, we got a few Mario accessories for the room including this cloud lamp from Etsy, some pillows also from Etsy, various figures and plushies from Nintendo, and some team mates at Automattic were kind enough to gift us an awesome mushroom lamp which finished the decor off nicely.

Overall it was a fun project and it’s always nice to do creative/hands-on things every once in a while to have a break from coding. I sure hope Dexter is a Mario fan, otherwise we may need to swap rooms 😎

Obvious disclaimer, SUPER MARIO BROS. is a trademark of Nintendo of America Inc. and has nothing to do me, this project, or this website.